Posted by permission of Philly Free School. First published on their blog, May 22, 2015. www.phillyfreeschool.org/blog

"We must raise both the ceiling and the floor."

-Sheryl Sandberg, Lean In: Women, Work, and the Will to Lead

I have noticed an interesting phenomenon during the admissions process at the Philly Free School over the past 4 years. Often parents will express interest in the school as a possible placement for their school-aged son, but will not consider it as an option for their daughter. The son is often struggling in his current school. He is too active, or too quiet, too academic, or too physical, and the conventional system is ill-suited to serve this boy's needs. His sister, however, is often "doing just fine." She gets good grades, or gets in no trouble, or makes friends easily, or gets along well with her teachers, or all of these. The parents, coming to see the value in a Free School education, think it might be just the thing for their son, but don't want to rock the boat for their "well-adjusted" daughter.

This is a mistake, and not just for the daughter. Here is why.

1) The daughter is NOT "just fine." She is sublimating her sense of self, her leadership potential, and her critical thinking skills to fit into a system designed for economies of scale, not the needs of individual learners. She is feeding on the praise, good scores, and honor rolls of a conventional school while starving her inner creator, risk-taker, and out-of-the-box thinker.

How do I know? Because I was that girl. I nailed every test, rocked the distinguished honor roll, participated in clubs, made friends. But where was the deep learning, the hard questions, the healthy skepticism? I didn't even know I was missing it until college, and by then, boy did I feel cheated. I was so busy meeting and exceeding the expectations of others that I never considered what it might mean to, or even that I had a right to, set and exceed my own expectations.

And the toll on girls can have subtle but tragic consequences: according to a recent study by the CDC[1], teen girls are more likely than their male counterparts to suffer from depression and alcohol use problems. 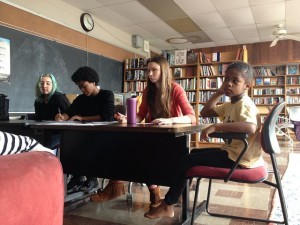 We don't want to sell our daughters short. We want them to excel, to lead, to change things for the better. Developing the personal strength and skill to do these great things takes time, and requires an education that nurtures her leadership potential from the crucial, formative K-12 years. In a May 2013 article in the Harvard Business Review[2], Herminia Ibarra, Robin J. Ely, and Deborah Kolb explain: "People become leaders by internalizing a leadership identity and developing a sense of purpose. Internalizing a sense of oneself as a leader is an iterative process." That is, it cannot be rushed or grafted on after the fact. And while of course we want the same opportunities for our sons, these authors point out that the hill is steeper for girls: "Integrating leadership into one's core identity is particularly challenging for women, who must establish credibility in a culture that is deeply conflicted about whether, when, and how they should exercise authority." Accepting "just fine," or waiting for our daughters to become leaders in college, simply isn't good enough.

2) Society gets shortchanged. The paucity of women in leadership positions in the U.S. today is a travesty. As Barnard College president Debora Spar[3] put it at a White House conference on urban economic development in February, 2012, "Women remain hugely underrepresented at positions of power in every single sector across this country. We have fallen into what I call the 16 percent ghetto, which is that if you look at any sector, be it aerospace engineering, Hollywood films, higher education, or Fortune 500 leading positions, women max out at roughly 16 percent," Spar said. "That is a crime, and it is a waste of incredible talent." What inventions would we all benefit from were more women in top positions? We like to think of the US as an enlightened world leader, when in fact we rank 73rd in female legislative representation, behind Bangladesh, Sudan and Pakistan[4]. 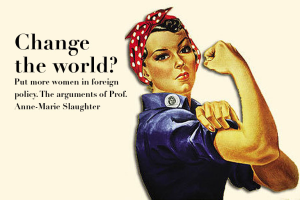 What new solutions to age-old global struggles would emerge with female voices being heard, at last, in the halls of power? In 2015, we would like to think that the gender gap is finally shrinking. Sadly, the truth is that women's advancement has flatlined in recent years.[5] What improvements to our quality of life in this new millennium would we all enjoy, if women were in charge of the way careers and families support one another? When we settle for a conventional education for our daughters, we all lose. When we give a girl the gift of a Sudbury education, like at the Philly Free School, she gets the opportunity to define leadership for herself, and to go after it with all she's got.

3) The son gets mixed messages. Is the Free School a real school for real learners, or a last chance ranch for kids who can't hack it in regular school? Is his future just as bright as his sister's, or do his parents think she is bound for big ideas, while he should start thinking about manual labor? Conversely, perhaps the mixed message is that he deserves the right to direct his own education and chart his own course, whereas she ought to accept direction by others and passively accept her place in a traditional system where the status quo continues to rule the day. Either way, the parents are missing an opportunity to show that they believe in the Free School model of education and trust their children, boys and girls alike, to create a path to achievement only they can imagine. 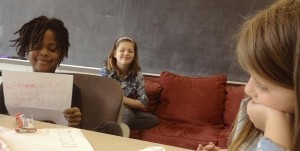 The school itself will also benefit greatly from the contributions of these young women. Though the school enjoys a nearly even balance of male and female students, I believe some girls are still missing out. I hope that the parents who consider the Philly Free School for their sons will also think about it for their daughters. The sky's the limit on where that can take us. In the words of the Bard, "We know what we are, but know not what we may be."

by Hanna Greenberg
Strewing is one of the latest techniques used by educators and parents to lure children to learn things that the adults want them to learn at a time of the adult’s choosing. It has become especially popular among “unschooling” homeschoolers.… Read more ›
Monday, April 9, 2018

by Foss Tighe
Cori, my oldest daughter and Kali, one of her close friends at SVS, are having a good-humored debate about which one of them reads more books. This debate has been going on so long now that for Christmas their friends bought them each a… Read more ›
Monday, January 2, 2017

by Foss Tighe
Recently I was struggling with ideas on how to get the kids to help out more around the house. I found myself pondering what leverage I had over the kids. We have chosen not to make their allowance dependent on chores and I don’t want to regulate or… Read more ›