Secret Worlds of Learning at SVS

Secret Worlds of Learning at SVS

Over the past few months I have noticed, and been fascinated by, the proliferation of “secret worlds”. As I’m an invited guest to these meaningful and sometimes sacred endeavors, I must omit names, locations, and other details, so as not to break bonds of trust. That said, I will attempt to convey the multifaceted substance of what has truly amazed me. 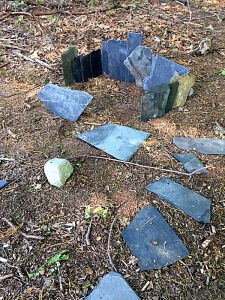 A majority of secret worlds I’ve observed have “rooms”, designed and constructed by the individuals who inhabit them. These rooms often appear in, beneath, or between trees. They include large stones, pieces of concrete that jet from the ground, logs, and other stationary items. These elements form the foundation of their living spaces. As in a traditional home, the foundation of each room serves as a base on which to build. The construction process may last for an hour, the better part of a day, or over the course of days or even weeks. Each room reflects the interests, tastes, personality and talents of the student who creates it. Rooms are sometimes made comfortable with leaves and other items found in nature, or with fabric carefully positioned or stuffed and sewn into pillows. 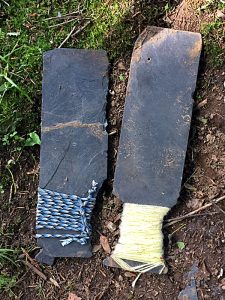 The creativity of SVS students is increasingly revealed as their rooms take shape. I was intrigued watching students create tools from found objects in order to build, sculpt, and decorate items in their rooms. Rocks and sticks initially played a central role in construction. A turning point occurred when a box of slate from the bridge roof, removed last summer, entered the scene. Students began using pieces of slate for various tasks. They sharpened them with rocks to improve their effectiveness. They used string, yarn, and fabric to firmly attach the sharpened pieces of slate to sticks. Among other uses, these refined tools cleanly and precisely chopped sticks into desired sizes. As time went by new and more efficient ways to carve slate were discovered.

I should mention that there is no set group of students engaged in these activities. Rather, students of different ages and genders may or may not be involved in these endeavors at any given time or day. Students sometimes form “clans”, not to be confused with cliques. Clans have evolving missions and rules. Their memberships ebb and flow; I was temporarily a member of two clans. Groups and individuals work alongside each other, learning new techniques through observation and occasionally instruction. For example, when one student discovered a particularly precise method for carving slate, others quickly adapted it to suit their purposes. 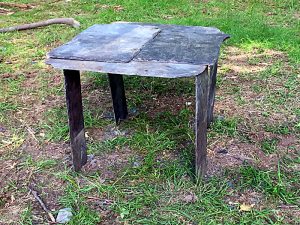 Slate is not only used as tools, it is also sculpted into pieces of art that adorn rooms or used for stand-alone installations. In one case, walls of a small house were erected complete with a walkway. Paint is used to decorate many of the artistic pieces. Of note is that the paint doesn’t come from the Art Room. Rather it is painstakingly made by grinding brick, slate, and other objects into a fine powder and adding liquid. Crushed berries and petals also serve as the base for paint. Paint brushes are made from a combination of sticks, grass, leaves, and other natural materials.

The rooms display students’ artistic sensibilities. While many of the same materials are used, the environments created are as unique as each individual. On a sunny day, one student relaxed in her room surrounded by a carpet of petals. She transformed the puddle in her room into a Japanese water garden, complete with carefully selected petals and leaves that floated on the water’s surface. In addition to decorative sculptures, functional objects are also built. Several pieces of slate, carved into precise sizes, were assembled into a sturdy and quite beautiful table.

Finally, many of the students themselves become part of the ambiance of their abodes. Sticks, blades of grass, feathers, and/or flowers are woven into hats, hair extensions, and hand-made headbands. These accessories harmonize with the look of the room. Paint made to decorate sculptures is also used on students’ faces. Thought and care is given to the color and design of the face painting, so that it reflects the concept of their room. I’m continually inspired by the ingenuity and boundless energy and imagination of SVS students.

by Mimsy Sadofsky
I realized that one of the kids in school who had been here for many years was about to turn eleven. (How dare she get so old?) I said, “Oh, I wish you were still 7½ .” What I meant, of course, was that the years go by too fast, and we remember… Read more ›
Monday, May 12, 2014

by Hanna Greenberg
This post originally appeared in The Sudbury Valley School Journal, volume 27, no. 5, May 1998. A young girl of nine or ten asked me to teach her math. I gave her some problems which she enjoyed doing. Next day she came to me with many sheets of… Read more ›
Monday, May 7, 2018

Sudbury Valley School: Celebrating a Half Century of a Radical Approach to Educating Children

by Daniel Greenberg
For 50 years, Sudbury Valley Schools, and other schools inspired by its model, have been providing children with a place to grow like no other. Our starting point is treating children who enroll at school, from age four and up, as human beings… Read more ›