One warm and sunny day

One warm and sunny day

Last Spring, after a long stretch of cold gray days, we finally had a warm, sunny day. Virtually everyone at SVS was outside. I was eating my lunch at the picnic table and was idly watching the various activities all over. Kids were running, sunning themselves, playing Frisbee, basketball, and whatnot.

By the swings, two young boys who are good friends were very much together – while each was doing his own thing. 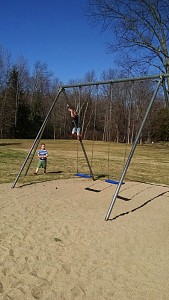 Cannon was swinging gently on the left swing, while Myles was working – yes, working – on shinnying up the pole which supports the swings, endeavoring to reach the top. However, when he got 2/3 of the way up, he got tired and had to slide down to the sand below. After a short rest, up he went again, equally unsuccessfully. He tried it many times. All the while, Cannon was calmly playing with the swings in various variations of climbing on them. I noticed that the two were talking to each other the whole time.

I was struck by how close they were to each other, how each kept the other company while at the same time each was doing something different. It was clearly a supportive, non-competitive friendship that I was lucky to witness. 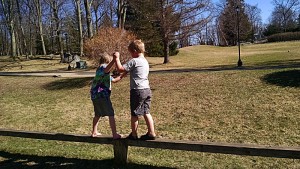 A day later these two good friends were playing “king of the hill” on the balance beam, which is about 18 inches above ground. Each of them climbed on it at the one end, approached the other until they met, and then locked hands and tried to push the other until one fell down. The whole while they were laughing loudly as they fell. I counted at least thirty times of this repeated game in which both were having the best time pushing each other while balancing on the beam. It was clear that the game itself was the object, not beating your opponent. Watching them made me feel happy to see how kids at SVS play challenging games without becoming angry or violent.

by Daniel Greenberg
I am always amazed at how many high school graduates have little or no idea of how everyday personal banking works. I mean, simple things like personal checking accounts. I know I didn’t. Well, that’s not the case with Sudbury Valley kids. Without… Read more ›
Monday, August 5, 2013

by Jesse Ide
When I was still a kid at SVS, Hanna, a staff member, would often ask me a question I never really knew how to answer. She'd ask, "Jesse, how did you develop such good language skills? You have such a large vocabulary, where did you learn it?" I… Read more ›
Monday, August 18, 2014

by Mimsy Sadofsky
This year we had a three-week summer session at Sudbury Valley, open to those who were regular students during the school year. It is hard to explain how lovely it was. I don’t think there were more than 15 or 16 kids for any of the three weeks, and… Read more ›