Recently I was struggling with ideas on how to get the kids to help out more around the house. I found myself pondering what leverage I had over the kids. We have chosen not to make their allowance dependent on chores and I don’t want to regulate or dictate screen time limits. Much to my amazement, I found myself thinking, “I could threaten to pick up the kids from school earlier if they are not more helpful at home.” I quickly dismissed the idea as rather backward thinking. The idea of “taking away” part of their education seemed draconian. It is not like I need to take the kids out of school during harvest time, because I need their labor to bring in the crops.

But the mere fact that such a thought crossed my mind is another example of how the Sudbury Valley School (SVS) reshapes how we and our children think about school. For our kids, school is no longer a dreaded chore. We no longer struggle over going to school, in fact the kids look forward to school. The ultimate paradox for me is that the kids were somewhat sad about the start of summer vacation, because they wouldn’t be able to go to school!

This year in particular my kids have been asking to go earlier, and stay longer, than prior years. This elastic school day, with a minimum of 5 hours any time between 8:30 and 5:00 pm is a wonderful by-product of the school’s philosophy of learning. That philosophy relies on an unstructured environment to promote learning through independent play and organization among the students themselves. SVS’ abandonment of the structured schedule of classes, that were designed to mimic the rigors of the early industrialized world, mean that arrival and departure times no longer need to be as rigid as the old time-clocks used in factory jobs. 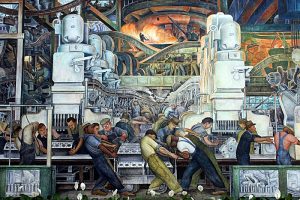 Scene from Diego Rivera’s Detroit Industrial Murals at the Detroit Institute of Arts. The mural depicts how industrialization required men to work in synchronization with the machines in repetitive demanding work. Our traditional education system, public and private, hails from the same period, designed to produce workers who can adhere to the stifling demands of factory work.

When Linda and I were first thinking about sending our kids to SVS, I remember spending considerable time on the SVS web-site trying to figure out “drop-off” and “pick-up” times. We were so conditioned to the faux industrial work schedule of pre-school, public school and after school programs, that it never occurred to us that a school would not have a precise and standardized start and end time for the students.

In public school we would read with great interest the complex drop-off and pick-up rules, trying to fit our family’s work and play schedule into that of the school. One year when a large snow storm resulted in a multi-day snow emergency, which restricted parking in the entire town, the schools put out a multi-page set of instructions on how drop off and pick up would work. Depending on the age of your child, you were to queue up at various school entrances at various time ranges, you were not to leave your car, instead, teachers and staff would deliver your child to your waiting and running car. The instructions even clarified which entrance and time range you should use if you had a family with multiple children of different ages. Overall it was an organizational marvel somewhat akin to the Berlin Airlift.

The flexibility of SVS drop off and pick up is now something we take for granted. As a stay-at-home dad, it allows our lives to follow the rhythms arising from our needs, passions and desires. If we stay up late watching a presidential debate, we can sleep a little later in the morning. If there is a big sewing project planned for the day, they can stay a bit later. If we have a doctor’s appointment, we can leave early. None of these require special permission nor do they generate reprimands (unless the kids end up with less than 5 hours at school). 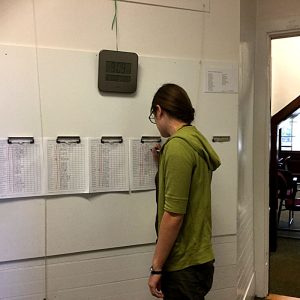 The five-hour rule means that despite the lack of drop off or pick up times, the kids still learn responsibility regarding attendance. The students must log their individual arrival and departure times on a central school attendance sheet. These logs are reviewed and you can be “brought up” for failing to meet your 5-hour requirement. My kids have become adept at doing time based math (which is tricky with a 12-hour clock).

So for example, this morning we did not get to SVS till 9:15, a little late by our recent schedule, my oldest is leaving early today as part of an internship program. Our original plan was to leave a 2 pm. But looking at the car clock in the driveway, she asked, can you pick me up at 2:15 instead of 2:00? Sure, no problem, we have flexibility and responsibility at SVS.

by Mimsy Sadofsky
I realized that one of the kids in school who had been here for many years was about to turn eleven. (How dare she get so old?) I said, “Oh, I wish you were still 7½ .” What I meant, of course, was that the years go by too fast, and we remember… Read more ›
Tuesday, July 14, 2020

by Jen Harnish
Reading for pleasure and knowledge has always been a meaningful part of my life. So when my three children started SVS at young ages I couldn’t help but wonder how they would learn to read without the direct instruction I had experienced as a child… Read more ›
Tuesday, July 14, 2020

by Jen Harnish
Reading for pleasure and knowledge has always been a meaningful part of my life. So when my three children started SVS at young ages I couldn’t help but wonder how they would learn to read without the direct instruction I had experienced as a child… Read more ›