While I was reading Daniel Greenberg's essay (“Are 1000 Pictures Worth One Word?”) on why it has been so difficult to convey the SVS experience in film and pictures, I found myself thinking about the evolution of my own understanding about what makes SVS so unique. I think Linda and I were like many SVS parents when we sought admission for our daughter. We were fleeing one horror or another of the public school system. What was most important to us then was what SVS was not. We knew she would not have reams of homework, she would be not be penalized for failing to conform, she would not have to spend long hours preparing for and taking standardized tests and she would not be required to remain all day inside a class room without any outlets for her energy.

But SVS is so much more than the lack of homework, and the freedom to climb trees whenever you want. I think I got my first glimpse of what makes SVS unique when we attended our first SVS concert. 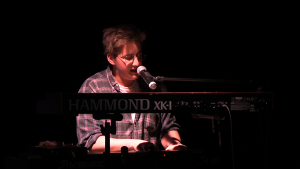 Like many musical events put on by people decades younger than myself, I found I knew very little of the music and despite my mild hearing loss, the music seemed much louder than it needed to be. There were also a number of very musically talented kids, along with a few that were less so.

But just barely below the surface I saw vast differences between the SVS concert and similar events put on at more traditional schools. What struck me immediately was the lack of involvement of SVS staff. A few were in attendance, but none were in a leadership or managerial role. At other school musicals and plays, the music teacher or drama teacher are always present, if not by actually serving as master of ceremonies, then certainly by coordinating and instructing from the wings. They are often noticeably anxious and, on some basic level, have taken on ownership of the success or failure of the event. Their egos are on the line, far more so than the student participants.

At the SVS concert this lack of a non-student ownership of the event was striking. There are a host of technical challenges to any sort of production, theater, dance, music. At the musical events at our public school there was a small cadre of dedicated parents, possessing the necessary technical skills, to run lights, manage sound equipment as well as sell tickets and staff the concessions table. At the SVS concert all of these were absent. Students played all these roles. 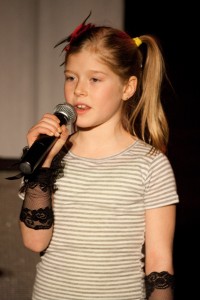 How refreshing this was! Our younger daughter had participated in a local children's theater, where parents had to buy the concessions, then staff the table. There was something surreal about giving my daughter a dollar, to go buy a snack Linda had purchased that morning, from a friend of ours, who was staffing the concession table during intermission. My daughter once even commented that it seemed strange that we had to pay to have her participate in the show, then had to pay for tickets to watch the show.

The full ownership of the SVS concert by the students was brought into sharp focus for me during what was really just a trivial moment during the concert. During an act change there was some momentary technical glitch. A couple SVS students were busily making the necessary corrections, but even before the problem had become a noticeable awkward pause in the show, another student jumped up in front of the audience, told a couple jokes to entertain the audience while the technical issue was resolved.

For me, that momentary delay, and how it was handled was a eureka moment. If this had been any school but SVS, one of the teachers would have come on stage and apologized for the delay, an army of overly involved parents would have rushed forward to solve the technical issue. The students would have likely felt a sense of dis-empowerment. 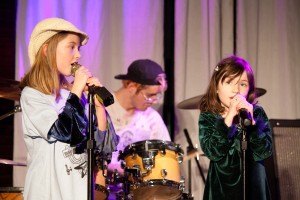 The concert also illustrated many other aspects of SVS. The multi-age acts were inspiring. Older more experienced musicians often provided the backup needed for younger kids to do their singing acts. The variety was impressive, the acts barely touched top 40 hits and ranged from classical to punk (do they still call it that?).

But for me, the insight I saw that night, was the educational value of the students owning the entire process. The collateral benefits to this ownership are probably impossible to fully enumerate. To produce such a successful event the kids had to learn and manage so much more than just the musical acts themselves: from the mundane issues of buying and pricing concessions, to the far more complex social tasks of self-organization and management.

I understand why the SVS difference cannot be easily photographed or filmed and then "given" to someone else to understand. SVS is so different, it is hard to fully understand without immersing yourself in parts of it. It needs to be experienced. And sadly only the staff and students get to do this on a regular basis. As a parent I must satisfy myself by getting occasional glimpses of it.

by Hanna Greenberg
It was warm outside. It was raining a lot and of course lots of kids were thrilled. Oh what fun it is to stand outside and let the pouring rain drench you! The mother in me wants to tell them to go inside and put on dry clothes, but the child in me… Read more ›
Monday, December 2, 2013

by Mimsy Sadofsky
I often ask myself why I am so enamored of the December ritual of making gingerbread houses (and trees) at Sudbury Valley. It is a big deal! Everyone has to put a lot of work into it. Not everyone in the school, but a much wider cross-section than… Read more ›
Monday, December 19, 2016

by Mimsy Sadofsky
An Open Mic is a scary thing to organize. After all, the success of the endeavor depends not on who says they want to sing, or play a song, or dance, or do an act, beforehand, but who actually steps up and does it at the time it is happening. In a… Read more ›