The first two weeks of this school year were blessed with superb weather. It was sunny and cool and the outdoors was full of students who were using the whole campus for their myriad of activities: conversing, reading, taking walks and so much more.

One day, as I was walking to the parking lot from the main building, I was particularly fascinated by the wave upon wave of kids riding on all sorts of wheels: skate boards, long boards, ripsticks, scooters and bicycles. 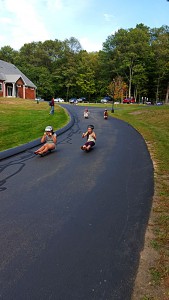 I stood on the grass by the side of the path and watched them. It was mesmerizing. It was another beautiful example of how children who are engaged in what seems like the same activity - riding down hill as fast as possible - are actually being incredibly inventive. The variety of ways they rode was astounding. Some rode on their bellies, others while lying on their boards on their backs like the luge athletes do, feet-first with the head raised a bit to see where they are going. (It looks scary to me but they seem really to enjoy it.) Others were crouching, or standing up straight - there was an endless variety of individual styles too subtle for me to discern because all this riding was done at top speed while maintaining total control.

After a while only a few riders were left and that afforded new possibilities. Several girls rode down in a circle. (It brought to mind sky-divers who hold hands while descending in formation.) Then they got a new idea, namely, to ride in two groups of twos. What was especially lovely for me was to see their exhilaration and beaming joyfulness. It seemed to me that in addition to the physical skill of riding they truly enjoyed the invention of new ways of doing it together.

I have observed this kind of thing happening here all the time, but this was somehow special. It was an occasion for me to witness how the games the kids play are actually just another way for them to be inventive and creative, to solve problems and be cooperative and sensitive to others, while at the same time working to improve their physical skills. And all this while engaged in what to the casual observer seems to be “simply” riding wheels downhill . . .

by Mimsy Sadofsky
This year we had a three-week summer session at Sudbury Valley, open to those who were regular students during the school year. It is hard to explain how lovely it was. I don’t think there were more than 15 or 16 kids for any of the three weeks, and… Read more ›
Monday, April 22, 2019

by Danny and Hanna Greenberg
All through this past winter kids at school spent time outdoors when they could (usually), playing basketball, taking walks, climbing on the rocks, or using the swings and the slide. After the pond froze and was safe to walk on, many of them were… Read more ›
Monday, May 8, 2017

by Wendy Lement
Part 1 - The Architects Where can insects, rabbits, and snakes go when they’re sick or injured? Two young SVS students not only pondered this problem, they took action. They had a history of creating entire worlds out of sticks, leaves, rocks,… Read more ›