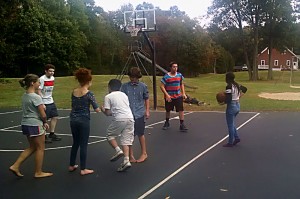 I happen to love watching the NBA play, especially the finals, in which only the best of the best compete with each other. The skill, power and grace displayed in these games is amazing to me.

The games at SVS are quite different, but oh so much fun to watch! The teams are formed on a game-by-game basis from whoever happens to show up. They are heterogeneous to such an extent that I can’t fathom how the kids manage to make the game work, which indeed they actually do. You see, the teams consist of people of all sizes, from five feet tall to over six feet. They're all ages, too, from ten to eighteen, and they have widely varied levels of skill and experience. No matter, it seems that the players adapt to whatever the team consists of, and very intense games proceed with lots of skill, power and yes, grace. What strikes me when I watch is the serious way the games are played. People work hard to possess the ball, and to reach the basket and score. It looks to me that it is all about the process and not about winning or dominating others, and that is why it is riveting to watch. 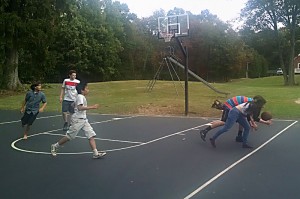 I am not alone on the sidelines. There is usually a fair-sized audience watching intently from the picnic table with lots of commentary, jokes and laughter. No words can compete with this scene in showing the essence of how age mixing is a blessing at SVS.

by Lauren Ligotti
The school year has started with a bang! Students and staff are excited for activities and work to begin. The amount of fundraisers we recently had is a good indication of it! Now that it is the beginning of October, all of the corporations for the… Read more ›
Monday, February 9, 2015

by Mimsy Sadofsky
Aren’t they adorable, all those little munchkins, big munchkins, bigger than munchkins, playing in the snow? Isn’t it nice that the school has so many good sliding places? One can even slide right onto the middle of the pond—not usually an option,… Read more ›
Monday, March 14, 2016

by Hanna Greenberg
The first two weeks of this school year were blessed with superb weather. It was sunny and cool and the outdoors was full of students who were using the whole campus for their myriad of activities: conversing, reading, taking walks and so much more… Read more ›