Where can insects, rabbits, and snakes go when they’re sick or injured? Two young SVS students not only pondered this problem, they took action. They had a history of creating entire worlds out of sticks, leaves, rocks, acorns, and other items found in nature –materials found in nature is their signature brand. The students invited me to the rocks to show me their latest endeavor. The materials were well on their way to becoming a hospital. Or so I thought.

Two days later I found the students drawing in the Art Room. I asked what they were working on now. “Now?!” The carefully constructed shelter by the rocks was the beginning of a much longer process. The day I had seen the pair by the rocks, they were getting architectural ideas by experimenting with their materials of choice. With a clearer idea of what was possible, they went to the next step: putting their designs to paper. And as two minds are better than one, they each drew their vision of the hospital and then compared notes. A couple of weeks later I thought about their project and wondered if their designs ever made it to the construction stage. So I asked them. The students stared at me as if I had two heads, and then one replied in an exasperated voice, “It takes a long time to build a hospital!”

Weeks later the architects caught me in a hallway, and brought me to a list of library holding locations. The girls explained that they had searched several rooms and combed through every book about animals they got their hands on. None of them contained useful material. They asked me for suggestions of other rooms to explore. And they instructed me, in no uncertain terms, which rooms not to mention; they had already been there. It took a moment, but I remembered that the Red Couch Room had stalks of National Geographics. We headed upstairs. The colorful photos intrigued the pair. I left the room feeling good that I had helped them on their quest.

I was wrong. After a thorough examination of our National Geographics collection, the girls determined that the magazines were useless. Before they could admit patients, they needed answers to some very practical questions: What do animals eat? How does one care for them if they’re sick or injured? I realized my mistake. Stories of elephants, tigers, zebras, and other exotic animals were irrelevant. Their hospital was designed to treat animals that roamed the school’s grounds. 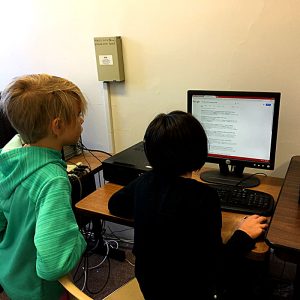 Given the specific nature of their quest, I thought the Internet might be their best bet. We went to the computer room and pulled up Google. But where to start? After listing the various species they were likely to encounter, the pair settled on garter snakes. One of the girls typed, “What do you do if you find an injured garter snake?” Several links popped up on the screen, and I left them to conduct their online research. Later that day they enthusiastically shared their findings. Two hours prior to their search, a man had posted a description of his experience caring for an injured garter snake he found on the side of the road. He fed the snake a mixture of chopped up earth worm and water, and the injured reptile recovered. This was exactly the type of concrete information our students needed. The next step would be interviewing vets for advice on how to diagnose problems and what medicines to administer.

Winter brought new developments to the students’ endeavor. Armed with information on how to care for future patients, they were ready to start building their hospital. Eventually it would spread throughout the campus. They began with an emergency room. I was brought there in secrecy; they had spent much time and effort on it, and didn’t want their work in progress to be disturbed.

Large low hanging branches of two pine trees functioned as the doors to the emergency room. Once opened, they automatically closed behind us. The trees themselves served as a sizable shelter for patients. I was given a tour of the premises. A circle of stones with a tent of sticks formed the fireplace needed to keep injured animals warm on arrival. Nearby, the girls had dug a well, to help revive the sick with water. A separate location was designated as the feeding area.

The emergency room was created not only to meet animals’ physical needs, their emotional health also entered into the equation. Animals that were sick or injured would likely be afraid. To sooth the animals and lift their spirits, the master builders had fashioned a musical instrument from a piece of wood that one could play with a stick to elicit a variety of tones. Sticks hitting broken off branches and knobs of a pine tree also made different sounds. The girls thought the animals would be comforted by lullabies, and they played an early version of one they were composing.

While the emergency room was created to ease suffering, the girls knew it was surrounded by a potentially dangerous world. Animals in need of medical attention or in recovery would be easy prey for other animals. Security was needed. The girls had fashioned daggers to protect their patients. The weapons were made of pine cones sharpened by rubbing rocks on the tips, and leaving the wider edges of the cones intact to serve as handles. They hoped that the sight of the daggers would act as a deterrent to predators, and that they wouldn’t actually have to use them.

As I inspected the weapons I asked what, in hindsight, was a ridiculous question: Would the daggers be used in surgery? The girls were struck by my lack of knowledge regarding basic hygiene. “Those are dirty,” one girl explained. “When we operate on an animal we’ll need sterilized knives.” In an awkward attempt to recover from my stupid inquiry, I made matters worse. They had been conducting research on healing sick animals. I asked the girls if they could train me. They had important stuff to do, and my second question only added to their frustration. “You can find that stuff on the Internet, you know!”

We dropped the topic of training, and continued our tour of the emergency room. The girls showed me their bunny transport. It was fashioned from a cardboard box. They acknowledged that this particular piece of equipment stretched their “all things found in nature” rule. But as cardboard is made from paper, which is made from trees, so it passed muster. 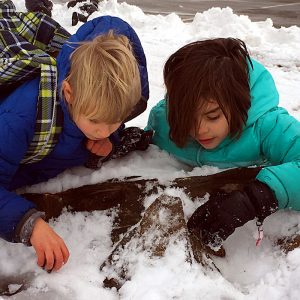 The tour concluded, but not their work. They proceeded with their major project for the afternoon – building a snake ward. They gathered sticks, roughly the same width and height; most were deemed unsuitable and discarded. Slowly and carefully they laid out the sticks, so that each snake would have the space they needed to rest and feel secure. After a considerable amount of time they finished the ward. I presumed they would move on to something else. Instead they inspected their work and discussed the concept behind their design. Their initial premise was that snakes would feel secure in a tightly knit ward. On further thought, it occurred to them that snakes might prefer privacy while recovering. In seconds they scrapped what they had painstakingly built, and embarked on creating prototypes for individual snake huts. The base of each hut required thin sticks of the same length and width. Then came the roofs made of tiny twigs meticulously placed in rows.

Once their work was complete, they explained some of the foundational principles that guided the design, building, and future operations of their hospital. Their principles were based on a profound respect for what occurred in nature. For example, when a wounded animal died, they’d feed it to another animal that was “food chain” appropriate. However, when a sick animal died they wouldn’t feed it to any of their patients, as that could make other animals sick and potentially start an epidemic.

They ended the tour by sharing their underlying philosophy. While designing and constructing each section of the hospital, they tried not to think like a human. Rather they attempted to get inside the mind of each animal they’d likely admit, and create an environment that would make each animal comfortable. Having spent time in human hospitals, I couldn’t help but wonder how the students’ approach might improve quality of patient care. I was also struck by how well the girls worked together. At no point did I sense any tension, as a myriad of decisions were being made. Their focus was clearly on creating the best possible hospital for prospective patients and providing excellent care. It didn’t matter whose idea was adopted or whose was rejected. Some of the world’s most successful companies have adopted a similar approach to innovation. For these students, negotiation, trial and error, creative and analytical thinking, and perseverance came naturally.

Children as actors in their own lives

by Foss Tighe
When we first enrolled our girls in SVS, I thought the emphasis on having both parents and kids sign things was a little silly or forced. The kids were nervous, not about going to SVS, but how they should sign. Was the first name and last name… Read more ›
Monday, November 4, 2013

by Kelly Shultz
Sometimes when I’m explaining SVS to people who aren’t familiar with it, they’ll ask me how kids will be prepared for the real world if they can do whatever they want all day. It’s not easy to explain in words -- or at least not without a lot of… Read more ›
Monday, August 27, 2018

by Jay Flood
On May 9th at noon the SVS Music Corp gave its first concert since it was disbanded three years ago. I was part and parcel to the proceedings, being the only adult with the privilege (tech and mixer), and I got to watch all the trials and… Read more ›